I know I've been spamming, but there is all this STUFF on my mind! I'll consolidate by putting it all in this one post here:

Depression
I get the definite sense that depression is creeping up on me and has been even before I lost my job. It's curious because not only am I am on an antidepressant, but I've been exercising like crazy, which I've always been told is a great way to hold depression at bay and will even work as a substitute for drugs at times. There are lots of obvious symptoms, from how I feel to headaches to fatigue to the fact that my place has become a total pigsty and I just can't make myself care. Actually the whole not caring thing seems like one of the most prominent symptoms, because it's affecting not just the house but how much I get done, how quickly I address issues, etc. I know I should care about stuff but I just would rather curl up in bed or play with the cat -- which reminds me very much of how I used to be.

Hip, &$#*@ Cat Bite
Lately my right hip has been acting up. Actually I first noticed back around Christmas but after that it was just periodic. Lately it's been an everyday thing. I'm not sure exactly what's wrong, but it's something to do with the hip socket and possibly a nerve. Some days it really aches and I want to hop on the other leg, but other days I don't notice anything.

Meanwhile, I've been hitting the cat bite with the prescription cream my doctor gave me. My skin is now really smooth, but alas it looks like I now have a weird-looking reddish purple scar and a lump to remind me why NEXT time I get bit by a cat, I should go to the doctor. At least it's on the back of my leg (lower calf) so I don't have to look at it.

Fruit Flies
Well, I admit I haven't done well killing them off, mostly because I'm such a slob, but tonight I took the hand-vac and inexplicably was able to suck up a dozen or more! I've noticed that if you go at them right at twilight, they are much less likely to fly off. I think maybe they doze or something. So every night around 7 I'll try to get them. Hopefully I will also manage to clean up the kitchen too, which is just encouraging them.

Kitty
Lately I've been feeling so blessed by the cat. Luckie is such a sweetheart. What makes it better is that she pretty much reserves her affections for me and hides it from others, acting reserved, cool, snooty towards Caleb and Daniel... but being a lovemuffin when she's alone with me. She jumps on my lap while I'm at my desk. licks my head when I'm back from the gym, chases me around, sits on the floor staring at me long, long stretches of time, obsesses over my wake/sleep times, loves being held like a baby, and is always talking to me. Such a shy little thing though, with anybody else.

So I enrolled for health insurance at the end of August. I hadn't received anything in the mail yet, like a card or paperwork, but my bank accout showed a charge for the first premium, so I thought it'd be on the way. After three weeks and still no card and no way to present proof of insurance to a doctor, pharmacy, hospital, etc., I called up the insurance agency. Their voicemail was hilarious because it kept asking me my member ID, which is what I don't have, but finally I was routed to a person, who looked me up and verified that they got the application, but it's still being processed. If I'm approved, I'll get a letter and a card. Seems to me that if they already took my money, I should be approved and should have my card. But what do I know?

Hopefully by the time the damn card comes, I'll have a new job and new insurance.

wanaga has just posted all the wonderful pics he took last week at Imperial Fez. I'm going to point to his Flickr gallery tomorrow and repost my favorite shots (hosted on my own server) but for now, I'm going to link directly to this "boob shot." The amazing thing about it? He took it without even knowing what he was taking a pic of until after the flash went off the picture was taken. Perfect though. 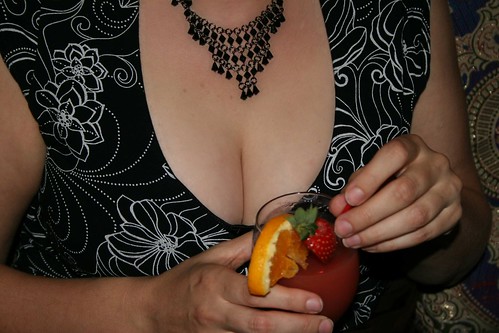 Lookie! Big version here
(This, BTW, is the top that got me a talking to at work. Which, OK, I can see...
but damn, isn't that the best cleavage shirt? Got it at New Look in Birmingham, England.)

I think it I should make it an LJ icon. Actually several of his shots from that night would make good ones, like the one of me demonstrating how long my tongue is and the dozen showing me being a lush.
Collapse